Classified: In need of better ice cream in Israel

I made my own ice cream last night.

I did this out of despair.

I do not like store bought Israeli ice cream. It’s awful. Even the halavi (dairy) ice cream (as opposed to the soy-based parve) is gross.

A complete waste of calories, if you care about that kind of thing.

I just want some decent ice cream every now and again.

For a while, I would splurge on the Ben & Jerry’s you can find occasionally in the supermarket, but the last five times I bought it, I opened the carton to find the ice cream melted and refrozen into an icy gelatinous mess. So, in addition to having no ice cream to satisfy my already salivating glands, I had to plan a trip to Shufersal to get my 48 shekels back.

Not easy when you live in the middle of nowhere.

I exaggerate. I live in the outskirts, but Israel is not a third world nation.

We do have high-falutin “Italian ice cream parlors.” However, I have no taste for Leggenda or Dr. Lek (which is spelled the same as Dr. Lick, but is apparently pronounced Dr. Lek, go figure) or any of these gelato type places that charge you 18 shekels for a cone (that’s $5, my US friends).

Even if they didn’t charge so much, I can’t go there with my nut allergic kid.  I found a peanut in my vanilla ice cream there just the other day, which successfully proved my  theory in the company of my husband that ice cream parlors are not at all safe for nut allergic kids.

So last night, for about 6 -7 shekels (the cost of cream, milk, sugar, salt, and vanilla), I made a pint of my own vanilla ice cream following these instructions and using this recipe which totally worked. 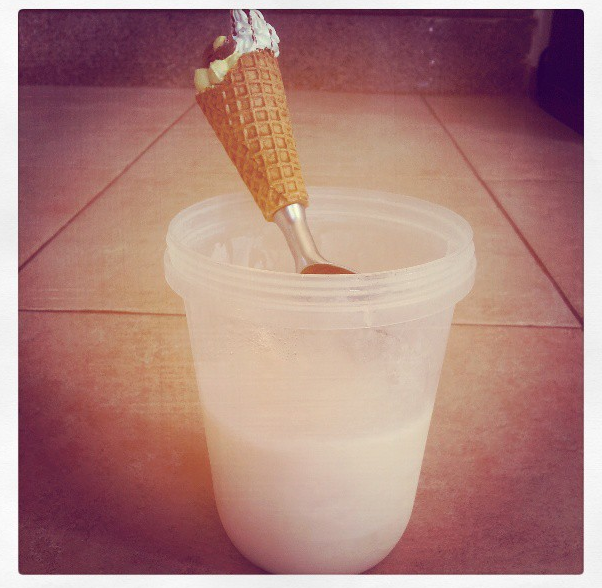 The recipe is super easy, and while a bit time consuming, does not require an ice cream maker.

Which is quite a relief.

There’s nothing more infuriating than searching like mad for a recipe on Google, finding one, only to realize it requires some expensive piece of equipment or a brand of soup mix only found in New Zealand.

Quite the opposite with this recipe, I had everything I needed  … even the ice (which was the hardest of all the ingredients to come by in Israel).

So, finally, one ice cream discontent in Israel may now be content.

Until the container is finished.