HOME | Events | Disclaimer: I am not the me you think I am

Disclaimer: I am not the me you think I am

In the days since the Justine Sacco twitter incident (which has officially been labeled a mob by the New York Times), I’ve spent a little time on a project that I’ve been meaning to focus on for a while:

Cleaning up my internet bread crumbs

You see: I’ve been at this a while. This thing I call “sharing of myself with strangers.”

I’ve been writing and posting opinion pieces, and uploading and approving photos of myself online since … well, at least since 1997. That’s as far back as I am able to trace myself though I imagine a stalker or a fairly good sleuth with a wad of cash with my name on it could identify earlier instances. Let’s hope that the first doesn’t exist, and the second never does.

For most of those 17 internet loving years, I stood firmly by the belief that sharing was good; identity theft was bad; and that since there was no way to stop people bent on investigating you or stealing your credit cards, why not position yourself in the light you prefer.

There was one little detail I didn’t pay attention to.

It’s that the light I want to shine in is ever shifting.

Even more so, there may come a time when I don’t desire the light. When I prefer to be hidden in the shadows.

If one day, a mob were after me, they’d find judgmental rants I am now ashamed of; they’d unearth unkind comments that were written on an off day; and they’d be able to amass a decent collection of really unattractive photographs of me in really unfashionable clothing (especially if they come across any from 2001 – 2003).

They’d find pictures of my kids that were cute in context, but now seem inappropriate. They’d stumble upon references to wacky dreams I’ve had or remembrances of drunken bodily performances. They’d certainly find articles written in a voice that is no longer mine; in a tone I no longer wish to express myself in.

I am not the girl you will find on a Google search.

I’m someone else entirely.

In the cleaning up of the bread crumbs of me, I began by deleting or making private any online content I thought might embarrass my growing children. An effort of Herculean proportions that I will certainly never complete to their satisfaction.

Next, I tried to dig up the most obnoxious, off-the-cuff public statements I’ve made over the past year or two on Twitter or Facebook. Things I meant in jest, but might one day be held against me in a court of rash, cruel, public opinion.

That my efforts are nearly inconsequential.

Because what is appropriate now might one day not be. And what I see as an innocent or well-intentioned sharing of myself  could, at some point, be used to position me as anything from self-centered to irresponsible to crazy.

What do you do with that knowledge?

Do you unplug completely? Do you spit in the face of future detractors?

Or do you do what any good lawyer would tell you to do? 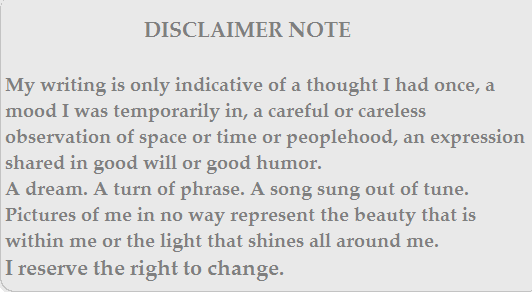