The best thing I never bought was this orange comb-brush. 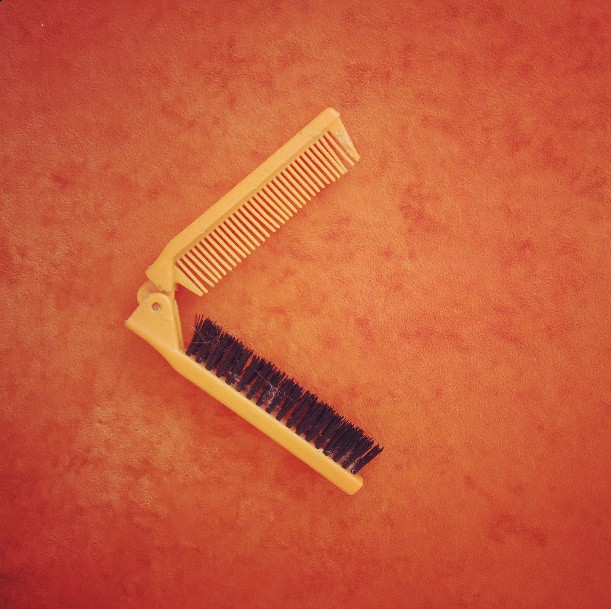 How do I know?

Because I’ve had it now for more than 30 years.

I got it as a party favor at a girl’s sleepover party when I was six.

It’s traveled with me through 4 schools, 10 or so homes, and at least 100 handbags and backpacks.

It survived our Wheaton terrier — the one we had for less than a year — whose teeth marks are forever indented on its frame.

It survived at least two perms.

And it survived Israeli lice.

If this orange comb-brush could talk, it would say:

“You should have waited til after the bubble burst to buy a house.”

About 15 years or so ago, I lost the orange comb-brush for a while.

I looked everywhere for it. Under the driver’s seat of my Nissan NX, inside eight or so Le Sport Sacs, behind the toilets and underneath the sinks of everyone I knew. I couldn’t find it.

Finally, I understood. It was really gone.

And so I bought the purple comb-brush. I carried it around with me for over a year until one day I found the orange comb-brush in a drawer inside my parent’s house.

I was elated. But also eerily aware that as happy as I was, I would have been perfectly okay had I never found the orange-comb brush.

Today, I still have both brushes. The orange returned to its rightful place in my handbag, while the purple spends most of its time lying next to my kids’ bathroom sink narrowly escaping Israeli lice.

I will never give up that orange comb-brush willingly. But I will be okay if it’s once again lost.

And while I thought for a long time, I would never feel as attached to the purple comb-brush as I did to the orange one, I notice my attachment shifting, my affinity for it growing. I see it in my memories and look for it when it’s missing.

It’s the purple comb-brush that I use to braid my daughter’s hair.

It’s the purple comb-brush that greets me in the evening as I turn off the lights to the bathroom and wipe down their crusty toothpaste from the sink.

And when three teeth from the purple comb-brush melted after someone accidentally left it on top of the toaster oven, I was really bummed.

But I kept the brush. Even though it’s deformed and not quite as useful, we still use it.

I found it in that moment when I realized I didn’t miss the orange comb-brush so bad after all … but I was still happy to have her around again.

And the moment that I realized the purple comb-brush wasn’t just a meaningless replacement; that things change and people grow and new memories form …and new loves appear where there was once only plastic.