Guns are just a metaphor

And the single greatest lesson I have learned in my ten years, 364 days of parenting.

If I look at myself now from the future, this will always be true.

Each day, as a mother, I am growing and learning and changing. And when I look back at the mother I was two years ago, five years ago, 10 years ago, I understand instantly how little I know. And in knowing this, I know everything.

When my son, who is turning 11 this weekend, was a little boy and started to amass little boy toys, we had a rule (my rule): No guns in the house.

As my son transitioned from dinosaurs to Playmobil, the rule shifted a little: No handheld toy guns in the house. But Playmobil policemen were allowed.

And as he grew, in a house that didn’t allow guns, he still played with imaginary ones, as boys do. I could’ve attempted to enforce a new rule, “No pretend guns with clothes hangers,” but by that time I started to realize, just a little, that I might not be able to prevent imaginary gun play and so I instated a new rule: No video games or computer games with guns.

This, I knew, would prevent my son from turning into one of those scary people on the 6 o’clock news; I just knew it. Video games and TV were really the culprits in the downward cycle of violence in America. If our children didn’t see it on TV or in video games, we’d all be safe. I was certain of it.

But, as you probably have gathered by now and mothers more seasoned than I already know, my son grew older. He started to do things on his own — when I wasn’t around. He played shoot ’em up computer games at friends’ houses where rules didn’t get in the way, and watched Clint Eastwood movies on YouTube. And one day, last year, got a Nerf gun as a gift from his classmates for his birthday.

On that day, I had to choose: Would I rescind a parenting decision I had made 10 years prior? Or stick to my guns, so to speak?

I let the Nerf guns in.

I held up my palms to the air that day and looked skyward and said to someone (or no one) in that defeated mother’s voice:

And an answer came down from somewhere or nowhere: You know nothing. And yet …

And yet, my son seems to. He seems to know something.

A year later, the kid has amassed a Nerf collection — guns, foam bullets, a vest.  And despite this, seems to know the difference between right and wrong. Play and reality. Seems to be able to function appropriately with peers — completely against my assumption 10 years ago about what happens to boys when they start playing with guns.

In a twist that feels unfathomable to me — a woman who once thought her sons would never handle a toy gun — my son is hosting 20 of his friends today at a paintball party. It makes me uncomfortable a bit; it does.  I find myself asking this morning: What does this say about my son that he wants a paintball party? Worse: What does it say about my parenting that I am allowing it?

And the only answer I can come up with is:

This is my BIRTH-day gift.

This knowing does not release me from fear or from self-blame for whatever my son may choose to be or to do in the future.  But, rather, allows me to be free to love in the best way I know how … today.

I am certain that I will keep making rules for my children. Just as I am certain I will always be afraid for them.

But, I suppose, that with each passing year, as I understand more and more how little I know about what my raising them will ultimately lead to, I will allow myself to let go.

To trust them to raise themselves.

And hope that my loving them was enough.

Because really, I know nothing. 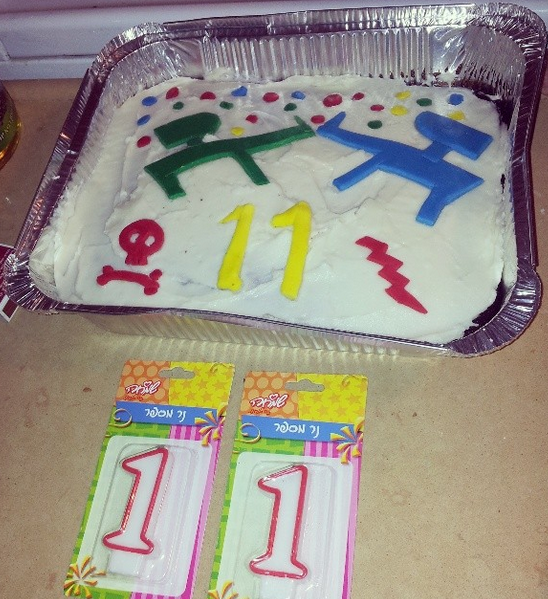