HOME | Books | Review: How to Survive a Sharknado

Review: How to Survive a Sharknado

In 1999, when Chronicle Books published the first in what would eventually be the popular Worst-Case Scenario book series, I was an early adopter. I can’t say for certain where I purchased my now worn copy (it’s still in my personal library after six moves, including two cross country and one cross planet), but I have a feeling it was at the Urban Outfitters on 6th Avenue in Greenwich Village.  It was my go-to spot for specialty books typically displayed and marketed as kitschy gifts. The display table in the front corner of the store by the window was the table I often hit first, with the intention to buy for keeps. (The Book of Spells: Over 40 Secret Recipes to Get Your Own Way in Love, Work, and Play was another purchase.) 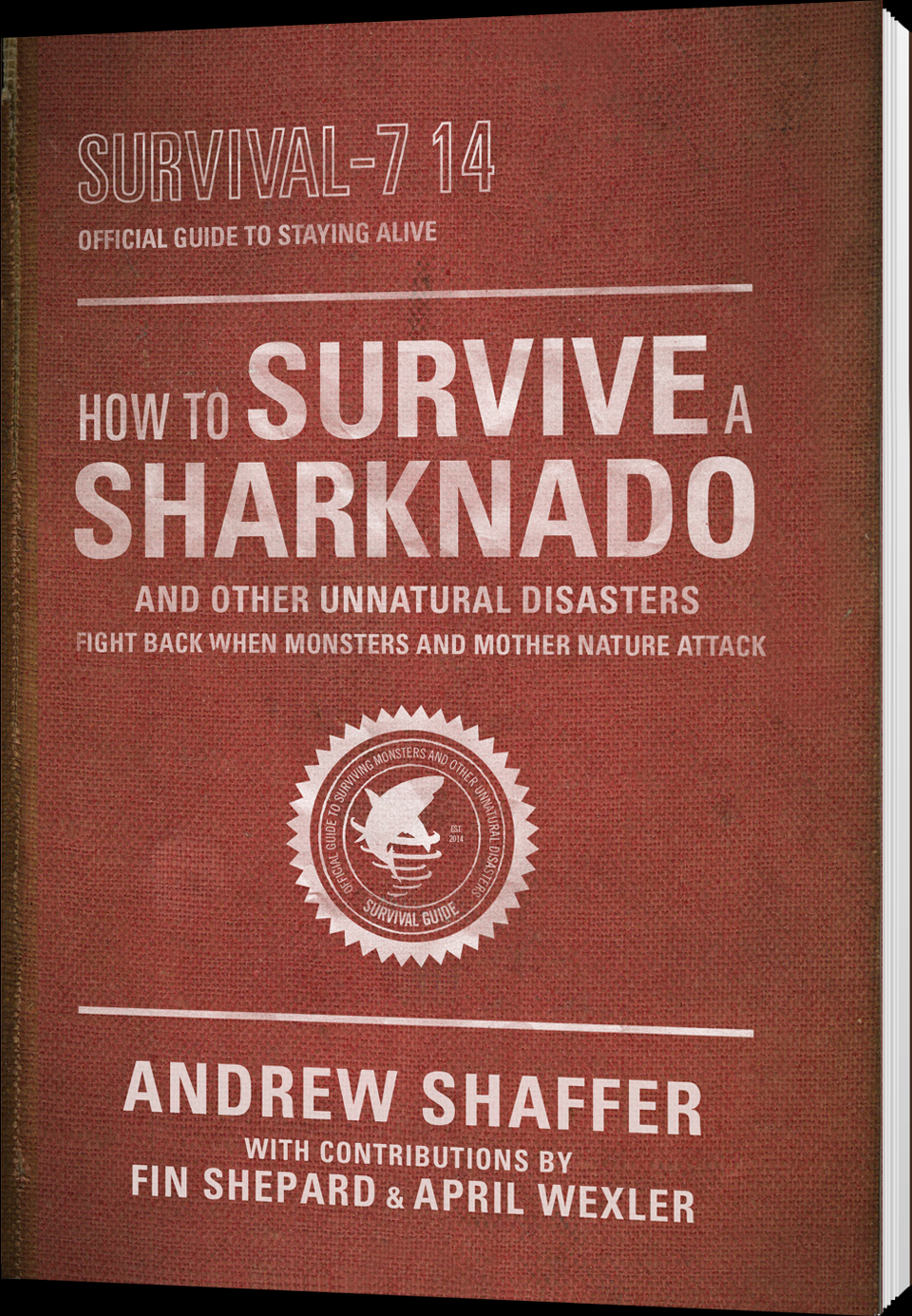 I’ve been planning for disaster almost my whole life. Certainly since the first time I watched the tornado sweep Dorothy away from Kansas into Oz. But I took a more serious interest leading up to Y2K and then again in advance of the yet-to-be-realized Mayan Apocalypse.

Like the author of How to Survive a Sharknado, I tend to approach my prepping with a blend of earnestness and humorous self-deprecation. After all, there’s a fine line between prepared and crazy.  (Prepared, for instance, is a safe room in my house in Israel stocked with two weeks of food and water for me and my family. Crazy, on the other hand, is the underground bunker in West Virginia stocked with MREs for 15 years. I am prepped, but I only dream of being crazy.)

Of course, there’s a reason for Shaffer’s humorous approach to disaster in How to Survive a Sharknado: He’s writing a fictional movie tie-in book, as opposed to a true reference handbook a la The SAS Survival Handbook by Lofty Wiseman (which I also have in my personal library and which Shaffer references in the introduction to Sharknado.)  How to Survive a Sharknado is part of the Syfy Sharknado brand, a made-for-tv film franchise I’ve — regretfully? —  never seen. (Watch this trailer for “Sharknado 2” starring Tara Reid.)

Like any good B-movie horror flick, How to Survive a Sharknado is rooted in truth.  Bizarre one-off disasters do indeed happen (See 7 Global Apocalypse Scenarios That Might Really Happen and After Hundreds of Bee Stings and Thousands of Volts, Tree Trimmer Eager to Get Back to Work) and people — not just preppers — go bananas on social media when they do.

But, as far as I can tell, Shaffer’s book is as fictional as the Sharknado movie, a humor book mocking real-life disaster coverage and promoting, in a way, a host of B-movie disaster flicks on SyFy, such as “Arachnoquake,” “Mega Python vs. Gatoroid,” and “Sharktopus.”  Shaffer plays it so straight in the book, however, I almost believed some of the stories were real until I got to “Dinonami,”

How does he do it? In addition to leading off each “unnatural disaster” chapter with a table of vital statistics, Shaffer also offers “reports” of incidents and commentary by “real-life” witnesses and experts.  In the section for Extreme-Weather Vortex, for instance, Shaffer references “the morning of May 18, 2008” when “the air in the lower atmosphere above Manhattan began swirling.

“The first sign of trouble happened in Central Park. Six-foot-tall whirlwinds filled with subzero air whipped through the park. Children chased these ‘mini tornados’ around — until the tornados started chasing the kids back…A twister formed near the Liberty Island, killing dozens and ripping off the Statue of Liberty’s raised arm.”

“At the site of one funnel touchdown in Midtown, I found evidence of lightning. It made perfect sense. Planets with high and low atmospheres are lightning machines. If the storm continued to build, I calculated the lightning would increase in frequency exponentially, building to a crescendo the likes of which we’d never seen on Earth before.”

I laughed out loud towards the end in the section called “Unnatural Disaster Kit” as I read the list of “tools and supplies,” which includes:

“Packaged snacks: Although not very nutritious, most processed foods like crackers and snack cakes have shelf lives longer than basilisks”

(Basilisk is total insider geek speak. It makes me feel loved and a little less lonely.)

The book is cute and clever, but would be funnier, I think, if I was a bigger B-movie fan (like my husband, for instance, who dragged me to Piranha 3D) or if someone bought me this book at Urban Outfitters on Sixth Avenue as a gift for my upcoming birthday; as a way to gently, but lovingly mock my zombie apocalypse obsession.

As I said, there’s a fine line between prepping and crazy: I prefer laughter to lunacy.

Disclaimer: I received this book from the Blogging for Books program in exchange for this review.