I work from home. And since my younger children are in Gan on the kibbutz and my older son takes a bus to his school in Givat Ela (a 15 minute-drive away), I don’t have much reason to leave. In fact, I don’t really have much reason to shower. (See? Already I’m contributing to the water conservation effort in Israel.)

This makes for a very insular life. Which, for the moment, I enjoy.

Especially since this type of isolation means I can forget I live in a country in the middle of a war zone.

Did you ever see the Christopher Reeve film, Somewhere in Time? It’s a time traveling story in which Reeve’s character, Richard, falls in love with a woman (Jane Seymour) he sees in a vintage portrait. Richard figures out how to travel back in time to the turn of the century to meet her…where they fall in love. He needs to be mindful, though, because if he sees anything that reminds him of his own time, he will be hurled back there in an instant.

I, too, need to be mindful. All it takes is one email, one conversation with a friend, or one visit to msnbc.com to remind me that I didn’t move to a communal farm in New Hampshire, but to a kibbutz in Israel, a land whose fate is consistently in question.

The other day I was driving to Nazrat Ilit, the nearest “city” to Hannaton with my friend Yitzhak, who is also a new oleh. On the drive, he asked me if I was concerned about the situation in Egypt. “What’s going on in Egypt?” I asked tentatively. He looked at me as if I had three heads. “Do you know what’s going on in Tunisia?” he asked. I told him I thought I saw a picture about it on Facebook. He sighed.

When I got home later, my husband Avi was closely reading an email in his inbox. When he saw me looking over his shoulder trying to make out the Hebrew, he quickly closed it out. “What was that about?” I asked. “Oh, nothing we need to worry about right now,” he replied.

The problem with his response is that I already 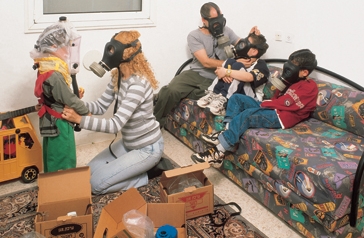 saw the photo included in the email which, it turns out, listed the dates the local municipality would be handing out complimentary gas masks to each family in the region, and the specific locations at which we could pick ours up.

“I see,” I said, noting that the soonest date to pick up our stash was mid-February. I took a deep breath and glanced over at the miklat* in our house, which for now is filled with boxes we have not yet emptied, as opposed to gas masks, extra water, or bags of dehydrated food.  I was better prepared for catastrophe in New Jersey, where I kept a big tupperware box filled with 2012 End of Days supplies in my basement.

Is it ignorant or naive of me to think I could move to Israel and not be forced to confront the politics of living here? I think the clear answer is, Yes.  And, yet, I’m doing a really good job of it so far.

Or so I easily lead myself to believe…

I think it’s only time until I will be forced to confront, or at least acknowledge, what it means to be an American Jew living in Israel. When all the careful indoctrination I received studying International Politics in college, interning at the Embassy of Israel, and working in Washington, D.C. think tanks rises to the surface.

I am, in fact, very aware and informed of the history of the land I now I live in. It’s one thing, though, to read Amoz Oz or write a paper on “Why the West Bank Is An Important Strategic Asset to Israel” (which I did in 1993). It’s quite another to pay taxes here, prepare my children for a bomb drill, or walk beneath fighter planes doing exercises in the sky.

When there is inevitably another media blitz about an Israeli military choice or when Israel is once again front and center in the international news, where will I be? Lobbying in support of my country? Or quietly insisting that the latest news doesn’t concern me?

Only time will tell.

Like many transformations I’m experiencing as a new immigrant here, my political leanings are still…TBD.

Miklat = Bomb shelter (which by law every new Israeli home built has to have. Most people use these as closets, storage rooms, or offices.)