HOME | Memory | Nibs give you magical powers, and other lies I told under the influence of candy

Nibs give you magical powers, and other lies I told under the influence of candy

If I had written this article on the 25 best candy bars of all time, I probably would have replaced Caramello with Rolos, and left out anything with coconut. But to be fair Rolos isn’t a bar, which is probably why the author chose Caramello in the first place.

“Hey, it’s Halloween season! Who can I get to ship me some candy corn to Israel?”

My second reaction, after I read the article was:

But then something about seeing all these old friends — candy bars I haven’t touched in years — caused me to delve deeper.

In particular, the nougat-filled Charleston Chew shined a light into the subterranean caverns of my memory.

I remembered a better chew. 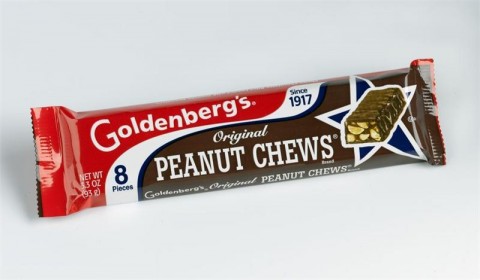 It was my favorite 5 cent purchase at the synagogue gift shop each Tuesday and Thursday afternoon when I was in elementary school.

Tuesdays and Thursdays were for Hebrew school, and for candy treats I could buy on my own. 4 pm was prime traffic time for the glass-enclosed gift shop at the end of a long hallway peppered with synagogue administrative offices. We lined up one behind the other inside the narrow non-room that was the gift shop, carefully avoiding the stained glass menorahs and brass kiddush cups sitting a top plexiglass shelves.

There was no regular, lovable character serving us at the register. No Candy Man. No Nat from the Peach Pit to welcome us. Just a retired old lady who walked over once or twice a week from the Windsor Towers to make a few bucks selling Judaica and sweets.

They didn’t sell regular candy at the gift shop, not that I can remember at least.

No Milky Ways or Hershey Bars or KitKats. The kind of treats you’d beg your mom for while waiting in line to pay for groceries at Pathmark.

No, the offerings at the gift shop were always obscure — come to think of it, either they were cheaper wholesale so the synagogue could make a higher margin of profit; or maybe back then, only B grade candy got a kosher certification.

Only old ladies dead and gone know for sure.

When I wasn’t buying 5 cent mini Peanut Chews, I was splurging on stick candy —

Rootbeer was my favorite.

Something I never bought, but my little brother always did was Nibs. I was never a licorice fan. I’d eat a red Twizzlers if you gave it to me for free, but I wasn’t going to spend my penny candy money on licorice.

Nibs were (are) tiny bite-sized cherry flavored licorice candies that were packaged in a semi see-through pink plastic bag.

One morning, as my brother and I were waiting for the bus at the corner of our street, he pulled out a half-eaten bag of Nibs from the bottom of his backpack.

“What are those?” asked Pretty, the Indian girl who lived down the street from us.

My brother and I looked at each other quickly. Pretty was not only burdened with the enormous weight of being named Pretty, but she was also gullible.

We had played a few harmless tricks on her before — told her we could make the pictures on our — ahem  Freezy Freaky — gloves disappear using only our breath.

Earlier in the year, I easily convinced her my hair was really a wig, by moving my bangs back and forth slowly with my hand pressed hard against my forehead. She never bothered to ask why I had to wear a wig. She simply … believed.

Our tricks never really hurt Pretty — in fact, I’d say they added wonder and delight to her early mornings. But, as a mother, I know the tricks we played on Pretty would not be antics I’d want my kids caught doing to other children today. You live, you learn, and (hopefully) you realize that just because something makes you laugh, doesn’t mean it’s funny.

When my brother pulled out the Nibs that morning — a synagogue gift shop purchase and therefore an unusual and rare confectionery find for our non-Jewish schoolmates — we jumped on the opportunity to delight Pretty …and yes, test how far we could go,

“What are those?” asked Pretty.

“They’re magical candies,” I answered. “When you eat them, you can read people’s minds.”

“Not true!” Pretty exclaimed. She wasn’t stupid … just a bit of a sucker, if you’ll excuse the candy metaphor.

“Yes, true,” said my brother, passing me a “how are we going to pull this off” look.

“Listen,” I told Pretty. “I know it sounds weird, and maybe it doesn’t work for everyone, but yesterday when we were eating these, we totally read each other’s minds.”

“Really?” she said, looking back to my brother for confirmation.

My brother and I both casually nodded our heads.

“We didn’t believe it either, but after eating just one, suddenly I knew he was lying about a secret room he found playing Adventure.” I said, pointing to my brother. “He didn’t find it.”

My brother glared at me. This was a real argument we had the night before. We both had been searching for weeks for the elusive gray dot our cousin Greg had told us about.

My brother looked at me, uncertain of what would come next.

“Why not?” asked Pretty.

“It’ll be too loud in your head — all those thoughts — you’ll get a headache.” I had read way too many young adult novels featuring characters with ESP.

Pretty considered this for a second and then said, “You’re probably right. It’s not a good idea. I’ll wait til after school.”

By the end of the day, however, after the bus dropped us off again at the corner, my little brother had already eaten the remaining Nibs. Conveniently, there were none left for Pretty to try.

And frankly, I don’t remember if she simply dropped the matter or if I came up with a reason why we never brought Nibs to the bus stop again.

But I do wonder where Pretty is now — and whether or not she ever truly believed our stories, or if she was, indeed the smartest one of us all, by approaching a remarkable claim with curiosity, instead of cynicism. Choosing to believe first, understand later.

This is the first post in a series on recurring dreams, dreams that repeat across the course of a person’s life, with either similar content…

When you say you’re a dreamworker or a dreams researcher, as I do, you naturally attract questions from friends, family, or strangers about their dreams.…

NDEs, the Afterlife, the Paranormal, and Dreaming

Last week, while I was away in Tucson at the 39th Annual Conference of the International Association for the Study of Dreams (my first time…
Scroll Up