HOME | Family | Random mouth running on a Thursday aka blogging

Random mouth running on a Thursday aka blogging

As we all know by now but never admit, there are no original ideas.

So when I think back to the beginning of January 2011 when I got the “brilliant” idea to chronicle my Aliyah experience on a personal blog, I giggle in minor embarrassment.

Did I really think that no one else was already blogging about the culture shock and the emotional upheaval that accompanies moving to a foreign country?

Did I really think I was the first non-observant, mostly secular Jewish mom to move to a kibbutz?

Did I really think I was the only self-described hipster mom observing local moms with a foreign-made lens?

Did I really think I was the only wellness bitch blogging for an English speaking Israeli audience?

There are no original ideas.

When I started blogging about my life in Israel, about motherhood here, and about making friends, it was an exercise in maintaining sanity. Truly, the way I process life’s ever stimulating handouts is through writing.

Sometimes, of course, this practice gets me into trouble. Especially when I want to make and keep friends, or get good grades, or convince people to pay me a high salary.

“Running my mouth off” before thinking — a phrase I used to hear a lot from my mother and my 2nd grade teacher, Ms. Levin, and my 8th grade teacher Mrs. Lingo — isn’t necessarily wise. Luckily, as an immigrant who still can’t carry on a conversation with a 3rd grader, I’m not as much at risk of mouth running as I used to be.

That said, my fingers inevitably find their way to the laptop and my previously diagnosed diarrhea of the mouth expresses itself through the raised cavities of my keyboard.

It’s all part of the ever elusive “process” we writers apparently possess. A process that for me, basically looks like this:

Driving/pooping/singing my daughter to sleep for an hour ==>

Hiding in the bathroom with my laptop pretending to poop ==>

Wishing I had time to edit my post before publishing ==>

Smiling with pleasure and relief, while simultaneously cringing with concern.

Yes, my friends. That is my process.

Maybe if I had a cartoon dog, things would be different. 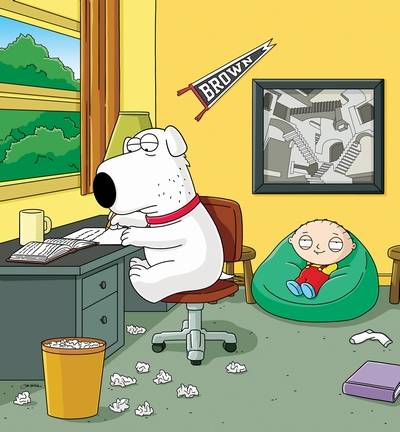 I could run ideas by him before I wrote them down, before they ever reached another person’s pair of eyes. Before they reached my mother, my husband, my neighbor, my boss.

He could help me identify which ideas were good, and which better belonged in my journal/rant notebook.

He could warn me when I was likely going to piss someone off.

He could surreptitiously serve me cocktails so I do it anyway.

And then he could hug me all the way back to self-assuredness.

In real life, this person is called an editor. But sadly, in the imaginary world that is blogging while working full time and raising children, good editors are rare.

As is ample time to think twice before hitting publish.